Know What You’re FOR

This month we’re featuring an incredible interview with my good friend, Jeff Henderson, who has a new book out called Know What You’re FOR. There are some remarkable insights in here… enjoy!

David: Jeff, you and I both learned a lot from Truett Cathy, and I know you included some of what you learned in your book. Can you share with us one of those lessons?

Jeff: First of all, I feel like the subtitle should be What Would David Do! The book opens with me driving the founder of Chick-fil-A, Truett Cathy, to a speaking engagement. And I honestly don’t even know where we went, or how I got the keys to the white Ford with cows spots on it. We were just driving down the road and he’s my boss’s boss’s boss, so I’m thinking we’re going to talk about chicken and sales but we didn’t talk about that. We just talked about how to be a good husband and dad and still be a good business person. For Truett, it was obvious you have to do both. Prior to that I would have already run through a brick wall for Truett but by the end of that night, I would have run through it faster and harder because I realized Truett was really FOR me.

That night, I stumbled on a truth of how Truett built the business. Truett was more interested in the business of growing people than people growing a business but ironically, that’s how the business grew. Because if you grow people they’ll grow the business and they’ll stick around longer. Only crazy people like me ever leave Chick-fil-A! So, you can actually do good for goodness’ sake and I personally began to experience that it actually works. It was so exciting to me to realize that you can be FOR people and if you’re really for people, in the end, they become FOR the business. 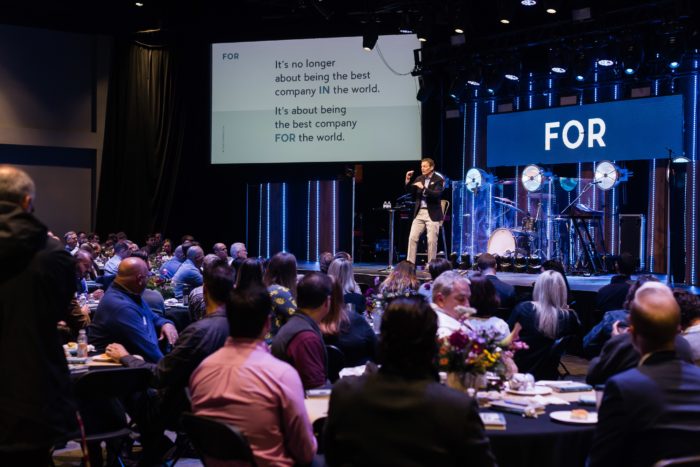 David: Jeff, in the book you talk about “flipping the script” on traditional marketing, can you help us understand that?

Jeff: Let’s use a sports analogy as an example. For too long, especially from a marketing standpoint, the business has been on the field and they’ve wanted to create raving fans in the stands, which is understandable. But I think it’s changing. And what we need to do is flip the script and put the customers on the field and the business, the team, and the company in the stands cheering the customers on; in essence say, “we want to be a raving fan of yours.” And when the company or organization becomes FOR the customer, the customer feels that and they in turn become FOR the organization. Because, a business is not what it tells customers it is, a business is what customers tell other customers it is. So, you’ve got to have a memorable, remarkable experience to give them. And if we’re talking about ourselves too much and if the hot spotlight and the highlight is always on the business, then the customers are a means to an end. And ultimately in that case, the business is the most important entity. Customers are walking away from that approach – they want to know how you’d help their life get better and the customers that experience that business or non-profit in that way, those customers will begin to cheer the business on. It’s still about creating raving fans, however, it’s about doing it in a different way.

Leaders who want to adopt this approach should ask themselves two questions:

David: So good! Can you share a few of those strategies or tools with the Spark a Revolution tribe so they can create healthy organizations and healthy lives in their own communities?

Jeff: One important truth I learned from David and Truett Cathy is this: Leaders are Repeaters. Vision rarely repeated is quickly forgotten. As leaders we can tend to think, I said it once, we had a staff meeting, I had a nice presentation, so let’s move on, and yet I’ve realized that we don’t live in that world. You have to say it over, and over, and over again. Vision is like a bucket of water: the more words in it, the more the words spill out. So, just a few words is ideal. But once you have those statements you have to say them over, and over, and over again. Chick-fil-A’s, “my pleasure” is a perfect example of that. People think that Truett stood up, said it once, and we all got it. And that’s not the case. He kept saying it repeatedly.

So every time I hear “my pleasure”, it’s an invitation to ask myself the question: am I staying on message? Our staff has certainly heard the For Gwinnett message; they’ve got the t-shirts, they’ve got the bumper stickers, all of that. But I have to remind them that there are a whole lot of people who have never heard it. 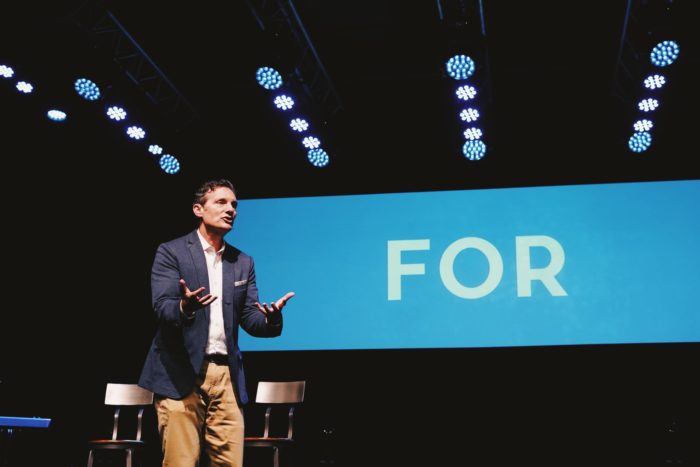 David: They say in advertising, when we’re starting to get sick of it, the customers are just starting to notice it. Because in advertising, you’re around it all the time like the “Eat Mor Chikin” campaign, for example. It will get old at Chick-fil-A headquarters years before it will get old for the average customer because we’re around it every day, everywhere we look. But that is not true for the average customer out there. We’ve seen it a thousand times for every one time they see it.

Jeff: I remember when we would visit Chick-fil-A Operators together you would always ask them, “what did you do today to build your business?” The reason that’s the best question I think is because of that little word today. Many times the operators would tell us about things they did last week or last month and you would say, “Well I understand that, and that’s great, but that’s not the question. The question is, ‘what did you do today?'”

The other thing I love in terms of creating and designing a culture that’s FOR the team is the whole idea of listening actively. What I mean by that is to try to listen, listen more than you talk, and be a really good question asker. That’s how our mutual friend, Cheryl Bachelder, turned Popeyes around. She would go ask team members questions and then she would say, “tell me more.” And they turned their culture around as a result. I think sometimes as leaders we feel the pressure to have all the answers but when you say, “hey, I bet you probably know things and can see things that I can’t see,” it creates humility and people want to follow humble leaders. My friend John Woodall says that God resists the proud and so do we. But then there’s the active part. You can’t just listen for show. That doesn’t mean that you have to go after every idea that people have said but you need to have a track record of implementing good ideas.

David: One of the things we both learned at Chick-fil-A was that the people closest to the work are the world’s greatest expert on the work. What tends to happen in a lot of organizations is that somebody goes on a big retreat, they go to the mountain top, and they come back with a great idea and try to push it on the organization – and all the people closest to the work realize that it’s filled with problems. Those are the people you need to listen to because they’re the expert on the work, not you who sees it for five minutes once a month.

Jeff: At Chick-fil-A, we had to work in a unit once a year which was so helpful. There’s nothing more stressful than working a Chick-fil-A drive-thru! So then moving forward you’re thinking, how do my decisions affect the drive-thru? The Sundays that I’m not speaking I try to go to the family ministry or sit in the back with our production team to see what they’re seeing and ask how I can help. And they’ve realized that I’m not coming with a clipboard trying to check on their performance, I’m there to ask, “how can we get better, because you’re the expert here not me.” To your point, that’s where the ideas are. Listening actively and being humble leads you to great ideas and it leads you to great leaders as well. Because people want to be believed in and when you listen to people, you’re showing them that you believe in them and that you’re really more interested in them than trying to power up and be the leader. That doesn’t mean that you can’t share your ideas and your vision but if it’s just up to me, then we’ve put a lid on our potential. 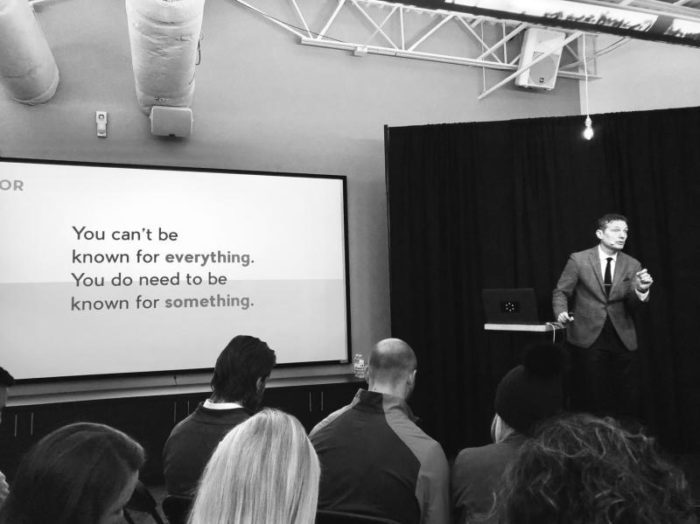 David: Such valuable lessons! Thank you for sharing with the Spark a Revolution community and for being a leader who models being FOR others.

GRAB KNOW WHAT YOU’RE FOR BOOK →

Jeff Henderson believes in the power of words. As an entrepreneur, speaker, pastor and business leader, Jeff is a master communicator at his core. He has witnessed firsthand the capacity for language to dictate vision and for vision to transform the cultures of companies and organizations worldwide. Recently named by Forbes Magazine as one of twenty speakers you shouldn’t miss, Jeff has helped lead three of North Point Ministries’ churches in the Atlanta, GA area since 2003.

As a much sought after thought-leader, Jeff knows the value of effective communication to spur growth and believes it is the key to impact change in one’s life ultimately.

Jeff has seen this outlook pays dividends in both the nonprofit and for-profit worlds. Prior to serving as a pastor, Jeff worked in marketing with the Atlanta Braves, Callaway Gardens, Lake Lanier Islands and Chick-fil-A, Inc., where he led the company’s sports marketing and regional marketing efforts. Jeff understands what it takes to build something from the ground up having founded several organizations including Champion Tribes, Preaching Rocket, MNTR (fka Launch Youniversity) and The For Company which helps churches and businesses grow by using the FOR strategy. Whether established or emerging, Jeff has a heart for developing leadership.

Fueled by the passion to see individuals and businesses thrive, Jeff has become a trusted voice for those who want to see true success in themselves and their sphere of influence. Jeff has a way of inspiring people to reach their maximum potential while understanding that it will not only positively impact one’s company and organization but also establish a legacy of healthy growth.