Truett Cathy, the Founder of Chick-fil-A, used to talk about the fact that sometimes 10% more effort yields a 100% better result. While I don’t know if that’s true in every area of business, it certainly is true in some aspects, and we discovered one of those for Chick-fil-A when we developed what we call the Second Mile Service program. We identified the first mile as being about doing things customers expect with excellence. And so we would ask ourselves, “what are all the things that customers expect of a fast food restaurant?” and try to do those with excellence. We had a lot of surveys which would tell us where we were disappointing customers and we would work on fixing those problems. But the Second Mile was completely different. For the Second Mile, we asked ourselves, “what are the things people would not expect from a fast food restaurant and how could we do those with excellence?” That’s the realm in which 10% more effort yields 100% better results.

In fact, I got a glimpse into the actual metrics behind this. A company called Forrester does what they call a Customer Experience Index. In the 2016 index, they interviewed 120,000 customers across a wide range of industries. And what was fascinating is they kind of compared doing things that customers didn’t expect, to doing things that customers did expect, or to use the Chick-fil-A vernacular, First Mile versus Second Mile Service. What they found was that the return on investment for Second Mile Service was 9 to 1, in other words, there was nine times as much return doing things that were beyond what people expected, than just doing what they did expect with excellence.

I think the problem for most corporations is that the things that we’re not doing well show up on all the surveys, so we tend to spend all of our time and effort fixing those. And it’s not that we shouldn’t do that (we certainly need to fix problems that have been identified), but it’s that we get so engaged and so immersed in fixing what’s wrong that we don’t take time to think about doing things to ‘wow’ customers. Things that would be Remarkable and go beyond what they were expecting.

And so literally, the math works! If we would just spend 10% of our time thinking of and executing things that people didn’t expect, we might get a 9 to 1 return on those so that 10% more effort could yield a 100% better result in that area of the business. At Chick-fil-A , we challenged ourselves to do just that; instead of spending 100% of our time fixing problems, we put 10% of that time, effort, and money toward things that our customers wouldn’t expect. That focus on Second Mile Service has certainly resulted in a 100% better result in the end.

Along the way, one of the things I’ve discovered is that life is measured in time but valued in Remarkable moments. If I was sitting down with you and asking you about your life, you probably wouldn’t give it to me as measures of time, you would talk about important moments along the way. One of my favorite things I did when I was interviewing people for Chick-fil-A is say, “OK, you have 20 minutes – imagine somebody is making a documentary of your life. Walk me through what would be in that documentary as it relates to the things that molded and shaped you into the person I see sitting here today.” And inevitably, what would happen during that 20 minutes is that person would share about moments along the way; that could be successes, failures, challenges they had to overcome… it could be a teacher or a coach that spoke into their life or about a parent or friend. But what all those things had in common is they were rooted in moments that had a disproportionate impact on their life. While we tend to celebrate the passage of time through things like birthdays and anniversaries, what we truly value is in fact, moments. And when you realize that, you also realize not all moments are created equal – some moments have disproportionate power and influence on our lives.

In psychology, they talk about a thing called the peak-end rule which says that there are two moments in all of our experiences that disproportionately shape our memory and the impact of those experiences. One of those is the peak moment of the experience (its most intense point) and the other is the end, or last, moment. Those two moments disproportionally shape our memory and have tremendous power and influence.

Inspired by an example I read about in a book called The Power of Moments, I decided to put this rule to the test on a recent family trip to Walt Disney World; every hour, on the hour, I rated the experience that we were having. The beginning of the day, around 8:00am, probably would have been rated a 2: we had paid extra money to stay on property in order to be allowed to enter the park an hour early, and now the bus that was going to get us there early was running behind! That brings us to 9:00am when we’re waiting in lines to get into the park that we thought we were going to avoid by getting there early. No sooner do we get in line for our first ride than we find out that it’s just been closed for repairs. So if we had rated our experience up ’til about 11:00am that day it would have been about a 1 or 2, because so far all we’ve done is wait in lines in anticipation of all these great things that didn’t happen!

And then, about 12:00pm, we went right to around a 9 rating because all of the sudden, the ride was re-opened and there was almost no line. It took us only five minutes to get on that ride and it was blissful. We were thrilled! But then I made the mistake after we got off the ride of getting back in that same line which now was an hour long. And on and on it goes, back-and-forth throughout the day. If you had just rated things hourly, we would have been at about a 5.6 rating because of all the ups and downs. But at the end of the day, while walking back to the hotel after the fireworks, I asked everybody to give me a rating for the day. There were six of us and our responses averaged to a rating of 9.5! So it begs the question: why did we rate it a 9.5 when mathematically it should have been a 5.6?

Well according to psychology’s peak end rule, there were two moments that were disproportionately powerful: that peak moment along the way which is when we got to go on that first ride, and the last moment which is when we were watching the fireworks to end our day. Both of those were very high ratings and that flavored our view of the whole day. So we didn’t have to have a perfect day all day long, and it wasn’t a consistent 9 or a 10 rating, but we just needed to experience a high rating at some point during the day and at the end as we left – and we did. And that is true of all experiences, regardless of what business you are in. 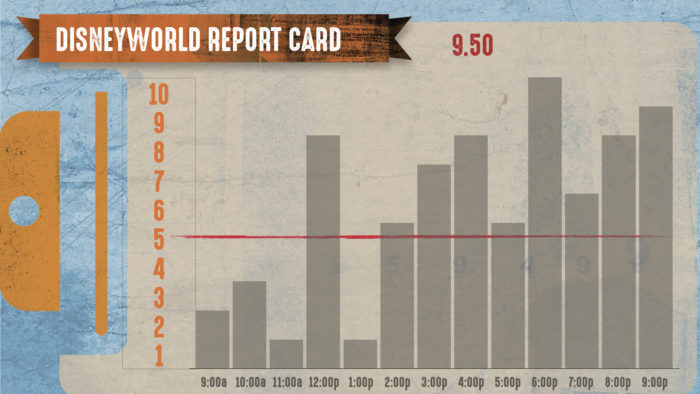 What most businesses miss when they’re spending so much time trying to fix the problems is creating those Remarkable moments that will outweigh all the other problems they’ve fixed across the day. If all we do is fix problems we might end up with a 5 rating – we’ve got to create some “10 moments” along the way. Fascinatingly, it’s not just about singular experiences; we have to create Remarkable moments throughout our relationship with customers. That one day report card we used while at Disney could just as easily be a report card for a ten year relationship with a customer. We might only have a 10 moment once every couple of years, but it’s so important to create those because that’s what’s going to stand out in that customer’s mind (not the time you forgot to put ketchup in their bag!). It doesn’t have to be every moment of every visit, but we do have to create a 10 moment along the way for them to look back on their experience with us and give the relationship a high rating.

P.S. – Be sure to check back next month to hear about the Employee Facing side of Remarkable Service; we’ll apply some of the principles we learned here to see how we can create raving fan employees!