A friend of mine, Scott Beck, is a serial entrepreneur behind the rise of Boston Market, Einstein Brothers Bagels, and more. He said something to me on a number of occasions that really didn’t make sense until I started thinking of it in light of what we’re talking about here. And he said this: the secret to growing a business is to reduce negative variance and increase positive variance. Connecting it to First Mile and Second Mile service, the First Mile is all about reducing negative variance. It’s how do we take the mistakes we’re making and reduce those to zero as best we can? But the second part, increasing positive variance, would be connected to the idea of Second Mile service; it’s that 10% more effort that yields 100% better results that we talked about last month. And so when I started thinking about this quote in those terms, it’s like the scales fell from my eyes and it suddenly made sense. 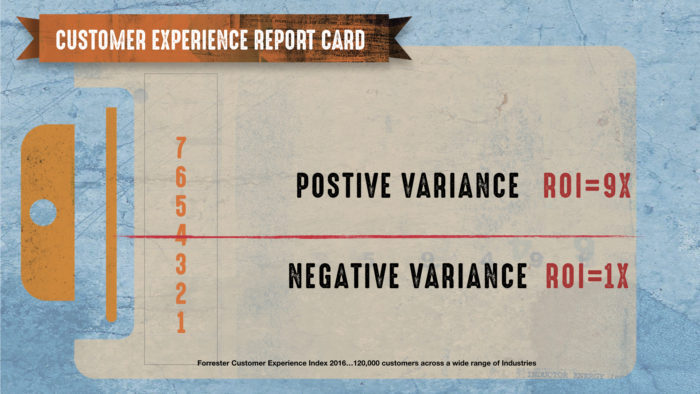 A major consulting organization did a massive study of several hundred thousand people in which they examined the difference between what employees are looking for now in a career opportunity versus what the previous generations looked for. I’ll put myself in the previous generation – when my generation applied for a job, the two main factors that people considered were product and profit. You signed up for a company that had a great product and was very profitable, and that was the magnet that attracted people. The study revealed that today’s generation is less about product and profit, although that’s part of it, but it’s more about purpose and growth. The younger generation wants to do something meaningful and they want growth, which has a double meaning; they want to be part of a growing organization and they want to grow personally as part of their experience with an organization. So, the employee value proposition is migrating over time as well, from product and profit to purpose and growth.

There’s a few ways we have done that at Chick-fil-A. For example, at our annual national convention, we host workshops on topics such as How to Be a Better Parent and Personal Finances. We don’t limit our thinking to helping people grow just within their career (although we offer lots of options for that) but we add things beyond that, that don’t directly benefit Chick-fil-A. Then at our Corporate Headquarters, we offer benefits such as onsite daycare and a free daily lunch which are built into the value proposition for our employees. Something like eating lunch together also has the benefit of contributing to culture creation, so instead of being viewed as an expense, it truly is thought of as an investment.

In addition to providing growth opportunities and a holistic approach to work and life, employers should be thinking about how to infuse what they do with purpose.

One of my favorite things to do while visiting with Chick-fil-A Operators was to ask them what business they are in because how we view things drives how we do things. And the favorite answer I ever got, from an Operator up in Virginia, was “I feel like I’m a Leadership Development Academy masquerading as a fast food restaurant.” Basically what he was saying is, ‘I’m selling chicken sandwiches, fries and drinks to fund my Leadership Academy, and my Leadership Academy is filled with teenagers in my area that come work for me and not only are they given a scholarship to develop as a leader, I will actually pay them while they’re here to be developed as a leader.’ Think about that value proposition for a minute; if you’re a parent and your child has an opportunity to go work for a competitor who sees them as a minimum wage worker – who’s going to pay as little as they can and cut their hours so they can maximize their profitability – versus for the Chick-fil-A Operator who says “I’m a Leadership Development Academy masquerading as a fast food restaurant”… which one is the parent more likely to choose and which one is more likely to have raving fan employees?

Historically, there’s been this picture that we separate life and work; that’s changing toward most people wanting to integrate the two. That integration creates this Remarkable culture of raving fan employees because if you’re interested in all aspects of their lives, employees are more interested in all aspects of your business. In turn, they will be more capable of contributing to the organization in ways you wouldn’t have imagined. Employees in that kind of culture are more dedicated, more loyal, and have more passion to help the company succeed that’s helping them succeed. That’s how a healthy organizational culture can lead to Remarkable hospitality.