The Most Important Lesson I Learned as a Young Leader

I once attended a leadership conference early in my career and heard a speaker that blew my mind about everything I knew about leadership. He instructed us to take out a sheet of paper and draw a circle with two lines (one North to South, and one East to West), like a compass. He had read an article that really challenged him about the nature of leadership and so he asked us this question- how much of leadership is really North to South, that is, leader to follower? At the time, I would have said 95%. The speaker challenged this notion, stating that North to South is only 5% of all leadership. Now he had my attention!

The speaker started to unpack it… first of all, 50% of your leadership effort should be self-leadership. If you can’t manage yourself well, why would anyone follow you? What you are reading, what you are doing to develop yourself… that all feeds into self-leadership, and that’s a super important part of leadership.

Then he said that the next most important thing is leading North because everyone reports to somebody. That’s about 25% of your effort. He was clear to say that he was talking about leading up, not sucking up. Up to that point, I always thought leading North looked like brown nosing, which I wanted nothing to do with. In fact, I had taken such an extreme position on the subject that I actually kind of ignored the people above me because I didn’t want to be accused of sucking up! Two things hit me: first, how would I feel if the people under me ignored me? That would be devastating to me, because I wanted to be significantly involved in collaborating with them. The second thing was that someday, you’re going to need something from the people North of you- money, decisions, resources… and the worst time you could start to engage is when you need something from them. You need to cultivate a trusting relationship ahead of that. When I hire someone, I feel so responsible for their future that there’s nothing I wouldn’t do to help them along the way. So, I got motivated to cultivate a relationship with the person above me because of my love for the people below me. 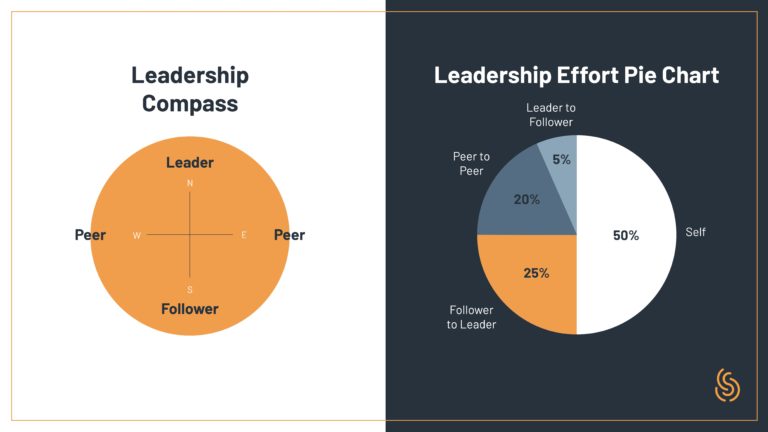 As I started processing that, it started to really make sense to me. If you’re doing the rest well, leading down comes naturally! When it comes to the people below you, position power means that you have power to hire, fire, and promote. But, if most of your leadership muscle is developed in the context of leading yourself, leading up, and leading across, what develops is in fact the purest form of leadership because you have no position power and must lead from personal power. If there’s anything I learned from Chick-fil-A, it’s that Personal Power is the most effective power source for any revolutionary leader.

Position Power is the last bullet we would ever want to fire. It’s the last resort. The cool thing is, if you’ve trained to lead yourself up and across, when you come to leading the people below you, you won’t be near as tempted to exercise position power. Your personal power muscle will have been developed so you can choose not to use position.

Consider this example: I remember John Maxwell talking about working with a CEO who had five people under him from which he was trying to find a successor. They were all roughly equal. In order to make his decision, the CEO had them all join a non-profit board. He had previously seen how they could lead with position power, but he wanted to see how they would lead without it. Could they lead out of personal power? And when he did that, one of the five emerged. That’s the kind of leader the CEO was looking for.

The beautiful thing about this message, and the part that I love most, is that everyone can lead themselves, lead up, and lead across, and that’s 95% of leadership- everyone can practice 95%. You don’t have to wait until you have people below you to start practicing leadership. People early in their career are often waiting for someone to report to them before they start practicing their leadership skills, which is actually the worst time to start doing so. Bottom line: everyone is a leader – practice for it, and when the day comes that you have people starting to report to you, you’ll have the right skill set and be prepared. This was a radical lesson I learned early in my career that changed my entire leadership trajectory, and I hope it will do the same for you.