The Most Under-Leveraged Aspect of Any Organization

I want to talk to you about one of the most misunderstood, under-leveraged aspects of any organization that turns out to be potentially the most powerful. That’s the power of perspective.

I learned this at a very early age, as a 21-year-old kid. At 21, the most remarkable future I could think of was to get out of school, make as much money as I could, as fast as I could, and retire as early as I could. In fact, I’d set a goal of retiring at age 35. So, as I interviewed, I was looking for where I could go to make the most money as fast as I could. Then as a junior in college, I met a gentleman named Truett Cathy and ended up going to work for a company called Chick-fil-A. It was there, I ended up finding something a thousand times better than retiring at age 35—something that as a 21-year-old kid, I couldn’t have even imagined existed. Something I wouldn’t have believed had I not seen it play out before my very eyes. Instead of finding the job I could retire from early, I found the job I wouldn’t want to retire from. The idea there could be a job I wouldn’t want to retire from had never crossed my mind. 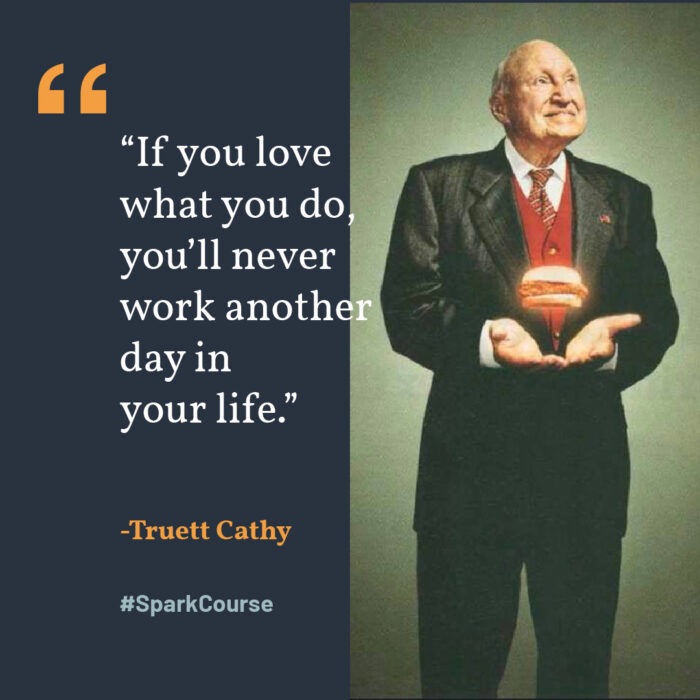 I’d been taught that work was to be avoided. Work was to be endured. Work was to be retired from. My perspective of work was changed forever when I met a man who viewed work as a source of contentment, joy, satisfaction, and reward. It made all the difference. Truett used to say, “If you love what you do, you’ll never work another day in your life.” I spent 37 years at Chick-fil-A and I never worked a day in my life. What I want to share with you is why perspective is important to any business, why it’s important to you personally, and how your perspective can change everything.

To help us navigate all this, let’s use this definition of perspective: the way we view things, drives the way we do things. The way we see something has a dramatic impact on the way we respond to it. And so, if we view things differently, if we view jobs as a source of satisfaction, contentment, enjoyment, we’re going to react very differently than if we view our job as a thing to be retired from, as a thing to be avoided, or as a place where we say, “Thank God it’s Friday.”

Perspective is the only thing in the world that can radically transform the results you get without altering a single element of your environment.

What I want to do is challenge you over the course of this new year to think about your current perspective… and could you improve that perspective of what you’re doing? Because how we view things will drive how we do things. That’s why perspective is the only thing in the world that can radically transform the results you get without altering a single element of your environment.

The power of perspective is the first topic we discuss in my Spark course, because it really is the foundation for everything.