How to Become Invaluable

Last month, we talked about what it means to be In Your Element: when you are unstoppable because you’re really good at what you’re doing (strengths), you’re energized by what you’re doing (passions), and it’s taking you where you want to go in life (values). Be sure to read it before reading the message below if you have not already! This month, we’re going to talk about how to become invaluable. 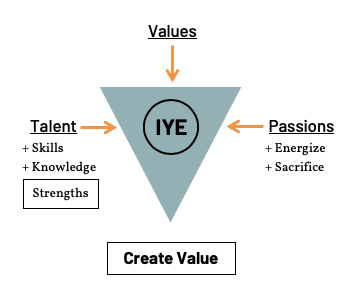 Now, when it comes to the annual performance review, there is an idea connected to IYE. Call it CCCP (you’ll find out what that stands for shortly). When I first hire somebody, the first thing I’m going to work with them on is Competency. We want them to be incredibly competent at what we hired them to do. I don’t know how long that season of building competency will last, but until they can do the work we hired them do at an A+ level, that is what we’re going to focus on. Let’s say that takes a year.

It’s not exactly in the center of their IYE. Maybe with this 20% of their time that’s been freed up, we can find a little job for them to do that’s right in their IYE. Let’s say we hired them to be an accountant, but what they are really interested in is public speaking. So, we’re going to figure out a way for them to do their accounting job, but we’re going to allow them to use that 20% of their time that’s been freed up to go do some public speaking. Now, here’s what’s interesting: the minute we find things closer to their IYE, guess what happens to that 20% of their time? It starts to look more like 40% of their time because they’re so good at it. They’re so naturally gifted that they can do in a fraction of the time what it takes other people ten times that to accomplish.

Now all of a sudden, the employee is contributing 140% of what we’re paying them to do. That’s a direct result of taking that little bit of capacity that’s been freed up and we’re putting them in a role that’s an even better fit with their IYE. Guess what happens to people contributing at 140% of what we pay them to do? They get Promoted. And when they get promoted, guess what happens? You start over with CCCP, beginning with building Competency in their new position and so on. Now, whatever we’ve promoted them to do is closer to their IYE, as is every job that follows as we continue to develop an understanding of what that is over time. 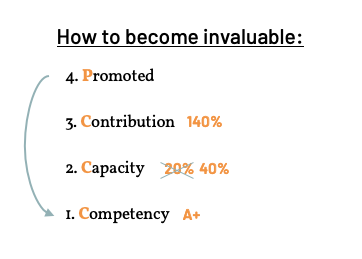 This becomes a cycle for employee development. So, at any point in time, we’re thinking about where on the IYE spectrum we are with this person, and where in the CCCP cycle? And that’s what our performance reviews will be about. We’ll talk about what a great job they do, what they’re really good at, what kind of skills and knowledge we can add this year, and what strengths we’re trying to cultivate. We’ll talk about their passions and what energizes them, and we’ll talk about their values. Then we’ll figure out where on the CCCP cycle we’re going to focus on for the upcoming year.

These two concepts together are a super helpful way to hire people, develop people, promote people and keep them moving to a brighter future.